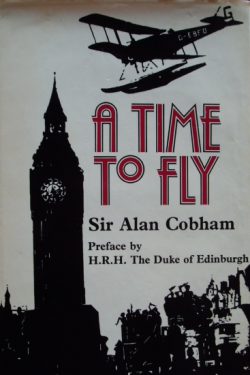 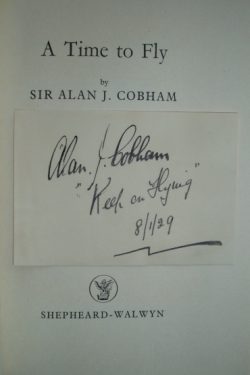 A TIME to FLY

Laid in card signed by Alan Cobham in black ink

Fine condition hardback book in dark red boards with gold gilt titles in a Fine condition unclipped dustjacket.  The signed card is laid in and  is practically the same shade of paper as used for the book.  A very pleasing copy of the book.

He was the original ‘Sir Alan’! One man played a greater part than any other in convincing world opinion that flying could – and would – become the accepted means of travelling long distances. Part crusader, part showman, and endowed with not only charm and luck but also enormous energy, throughout his life he was a pioneer. Whether he was flying to South Africa or Australia or taking thousands of ordinary men and women for their first flight at one of his National Aviation Day displays, or exploring the practical possibilities of refuelling aircraft in flight, Cobham was a man who gave everything he had to the one idea which resulted in the universal acceptance of the aeroplane for civilian use.

The book recalls the days of open cockpits with the wind screaming past fragile wings hour after hour; of dangerous landings on mud or grass in countries where no plane had been before; of aviation’s heroic age; full of the exhilaration and drama of striving for what was deemed impossible.

Sir Alan had just completed his autobiography when he died in 1973. This book is the distillation of his manuscript and it vividly summons the days of wide open horizons and the thrill of pioneer adventure.

A enthralling memoir from one of Britain’s most active and colourful aviation pioneers complete with a beautifully signed card bearing his famous catch phrase.