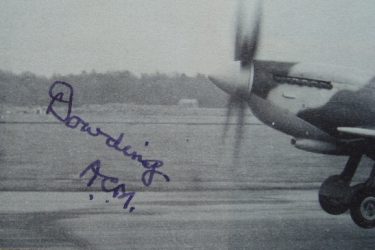 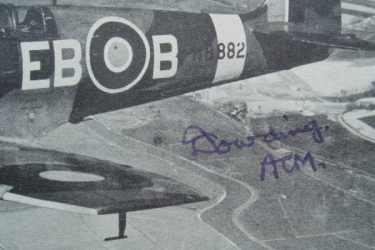 Two Spitfire pictures, each signed by

The pictures are mounted on a home-made board with a newspaper clipped portrait of Dowding.  On the reverse is a hand-written biography of Dowding signed by the person who made it.  He also writes “Lord Dowding sent me this photograph back signed on September 5th 1960”.

ACM Dowding’s leadership was critical to victory during the Battle of Britain. Dowding was a determined leader, which brought him into conflict with peers and superiors. He strongly argued that Fighter Command’s role was to protect Britain, and he challenged the use of the RAF’s valuable resources to protect France, famously writing to the Air Ministry in May 1940: “If the Home Defence Force is drained away in desperate attempts to remedy the situation in France, defeat in France will involve the final, complete and irremediable defeat of this country.”

During the 1930s in preparation for war, Dowding oversaw two developments which would become vital to victory during the Battle of Britain. He supported the development of fast fighter aircraft – the Spitfire and Hurricane – and provided funding for the first experimental radar (then known as RDF) stations on the coast.  At RAF Bentley Priory, ACM Dowding oversaw the development and implementation of the world’s first integrated system of air defence, which became known as ‘The Dowding System’.

A pair of scarce Dowding signatures that could be used for a variety of purposes.