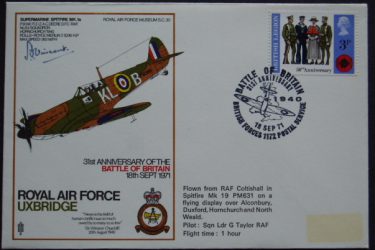 An RAF Museum cover from 1971 signed by

Few RAF officers have had a more varied and active career than Stanley Vincent who is the only man to have shot down enemy aircraft from single seat fighters in both World Wars. Nobody else can claim to have shot down an Albatross and a Bf109!

Between those wars he was CO of 41 Squadron flying Bristol Bulldogs. He was posted to Iraq and Palestine flying obsolete aircraft and driving old armoured cars before returning to command RAF Northolt during the Battle of Britain where he borrowed Hurricanes to have ‘a crack at Jerry’ and see for himself the fighting spirit of the ‘Poles’.  He then was posted to the Far East and was a Senior Staff Officer for both General Slim and Louis Mountbatten.

Citation for the award of the Distinguished Flying Cross.
Group Captain Vincent has been observing his wing from the air and up to the end of September 1940, has made some dozen sorties alone.  One day in September 1940, he met 15 Dornier 215’s and turned them back, damaging one.  Later in September 1940, he destroyed one of a large enemy formation and created so much confusion that another Messerschmitt 109 was shot down by its own pilots.  He is a born leader and has brought the efficiency of his station to a very high level.”

A rare RFC and Battle of Britain signature

The FDC is in Fine condition