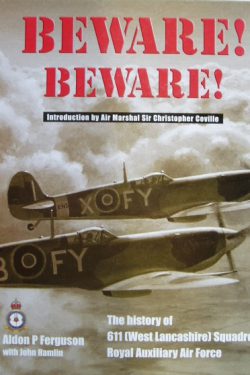 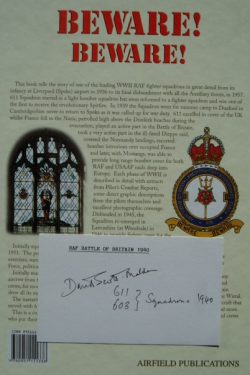 The History of 611 (West Lancashire) Squadron

Fine condition hardback book in photographic laminated boards as published.  Clean, tight and bright. The book feels unread. This is a particularly pleasing copy of this very scarce squadron history.

Formed at Liverpool (Speke) Airport in 1936 with volunteers from the Liverpool area, the Squadron had an illustrious history up until its final disbandment in 1957. The squadron received Spitfires in May 1939 which it continued to fly in various marks up until 1951 when it re-equipped with Meteors.

The narrative is supported by over 200 photos and numerous appendices detailing every aircraft that served with 611; CO’s, bases, Roll of Honour and combat claims. This is a history of a fighting squadron and its men, both air and ground crews who put their lives at risk in WWII, many paying the ultimate sacrifice.

A great copy of this excellent, very scarce squadron history enhanced by a card signed by a distinguished 611 Squadron pilot.  Signed cards and bookplates are available for other 611 Squadron fighter pilots such as Duncan Smith, Roland Beamont, Charlton Haw, AC ‘Joe’ Leigh and Johnny Checketts.