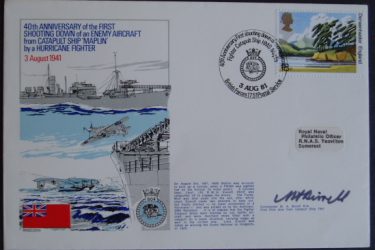 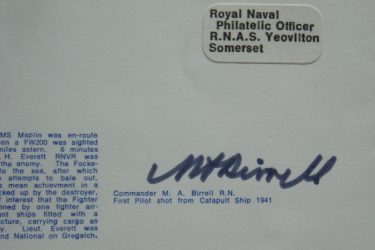 Maurice Birrell completed his flying training in May 1940 and in response to Churchill’s request to the Admiralty for pilots he was attached to the RAF and joined 79 Squadron at Biggin Hill in July 1940. He returned to the Fleet Air Arm flying with 804 Squadron and when it became the Catapult Fighter Unit he was the first pilot to be catapulted from a CAM ship.  He twice survived being sunk by a U-boat in the Atlantic, in May and again in October 1941.  He stayed in the Navy, serving in Korea, retiring in 1972 and passed away in 1990.