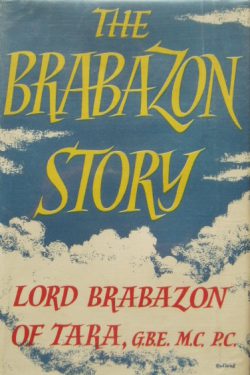 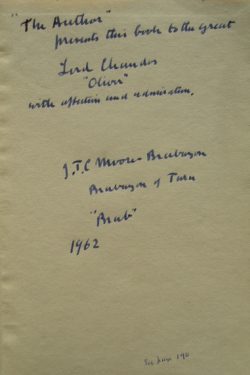 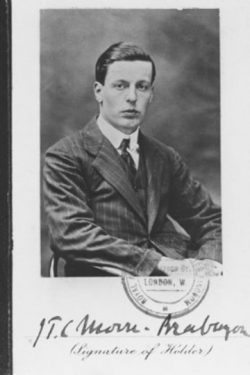 The autobiography of one of Britain's greatest pioneer aviators

Signed by Lord Brabazon of Tara

Oliver Lyttelton, 1st Viscount Chandos, KG DSO MC PC (1893–1972) was a British businessman who was brought into government during the Second World War, holding a number of ministerial posts including President of the Board of Trade.  He is mentioned in the book on page 190.

John Moore-Brabazon  (1884-1964) learned to fly in France and became the first person to be licenced in Great Britain as an Aeroplane Pilot, holding Royal Aero Club Pilot Certificate No 1 and he filled a prominent position both in the aviation history and the public life of Great Britain.   He went up in balloons while still at Cambridge; he was one of the first to take up motor racing; he was an aviation pioneer before the war and flew with the RFC in WW1 making important contributions to aerial photography.  He was an accomplished golfer, a veteran of The Cresta Run and he ran the Ministries of Transport and Aircraft Production during WW2.

In 1909 he made the first live cargo flight by aeroplane, by fixing a waste-paper basket to a wing-strut of his Voisin. Then, using it as a cargo hold, he airlifted one small pig thus proving that pigs could fly! In October of that year Brabazon won the first all-British competition prize offered by the Daily Mail for the first machine to fly a circular mile course and later that year he won a ‘long distance flight’ prize of £1000 with a distance of 17 miles.

A fascinating and humorous autobiography and a scarce signed aviation book previously belonging to an eminent national figure.