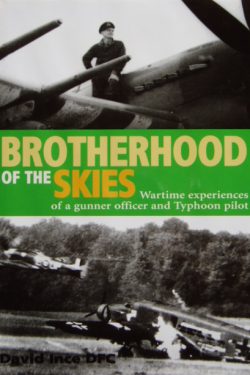 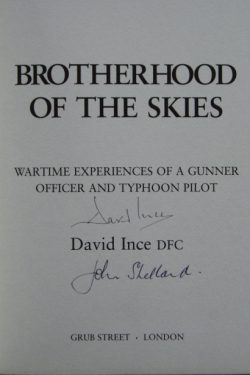 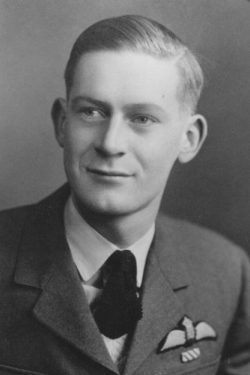 BROTHERHOOD of the SKIES

Wartime experiences of a gunner officer and Typhoon pilot

Signed by David Ince and John Shellard on the title page

Glasgow-born David Ince, a Royal Artillery officer, won a DFC as a pilot with RAF Hawker Typhoon ground-attack squadrons harrying Nazi factories, trains, traffic and retreating armies from Normandy across north-west Europe until Allied victory in May 1945. Ince flew and survived 150 sorties with 193 and 257 squadrons. He also test-flew for, and took part in, the only known operational use of napalm against the enemy in Europe; and after the war completed a test pilot course and became a record-breaking competitive glider pilot.

A very readable account of the author’s experiences and his views on leadership in action.  He is frank and outspoken about the courage, fear, team spirit and motivation that he and his comrades shared throughout the war.  The story of his remarkable life in flight is atmospherically told and skilfully conveys the urgency and mood of the times, the fascinating people he encountered and the obstacles that he met along the way.

Flt Lt John Shellard was a Typhoon pilot on 263 Squadron.

This is a very nice signed copy of a thought provoking book.

This book is listed on ACE. To purchase, please contact Spitfire Books