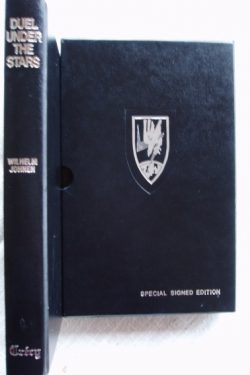 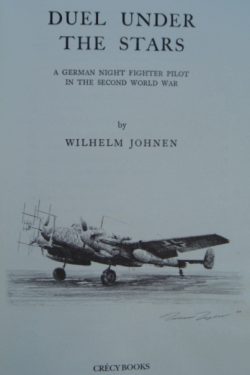 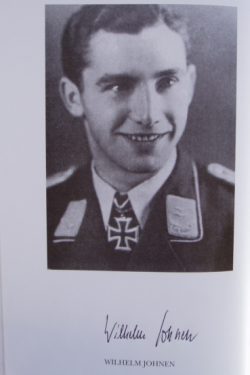 DUEL under the STARS

Completely Unique Special Edition ~ the only one!

Signed by William Johnen on the frontispiece under his photograph

Further 15 tipped in signed photographs of German and British night fighter pilots;
each pilot on a single page, with photo, career details and signature:

Richard Taylor’s extraordinary skill with a pencil is unsurpassed and his exquisite, detailed remarque drawings are highly prized by collectors. Having his drawing of Johnen’s NJG 1 Messerschmitt Bf 110G-4 on the title page of ‘Duel Under The Stars’, opposite Johnen’s original flat signature, is a fantastic, one-off combination specially commissioned by Spitfire Books.

This is a Luftwaffe Messerschmitt Bf 110 night fighter ace’s account of Luftwaffe night fighter operations in WWII.  It was one of the first of its type published in English in 1957 and it has been reprinted many times. His story covers events not only in the air in the night battles over Germany but also of the technological war waged throughout, the decline of the Luftwaffe and the dreadful effect of Allied raids over the Reich.

A fascinating and dramatic account of the night air war over Germany ‘from the other side’ with a beautifully presented collection of scarce signatures. Plus, of course, Richard Taylor’s fabulous remarque.