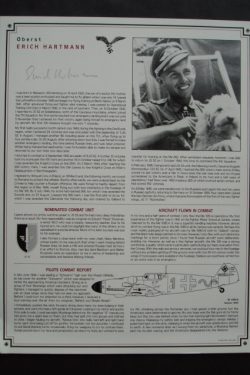 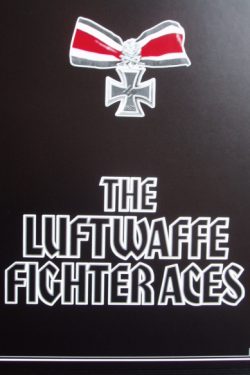 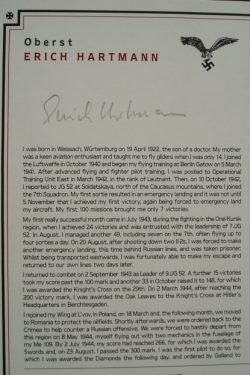 Published over 30 years ago by the Military Gallery, these are remarkable profiles of legendary Luftwaffe Aces of WWII. Each fighter ace personally wrote his own profile and then autographed each copy in pencil

For sale is the profile card of

Erich Hartmann was the top scoring Luftwaffe fighter pilot of WWII. Nicknamed “Bubi” by his German comrades and “The Black Devil” by his Soviet adversaries, he flew 1,404 combat missions and participated in aerial combat on 825 separate occasions.

He claimed, and was credited with, shooting down 352 Allied aircraft—345 Soviet and 7 American—while serving with the Luftwaffe. During the course of his career, Hartmann was forced to crash-land his damaged fighter 14 times due to damage received from parts of enemy aircraft he had just shot down or mechanical failure. Hartmann was never shot down or forced to land due to enemy fire.

He survived the war to spend 10 years as a Soviet POW and then re-joined the reformed German Air Force and commanded a wing of F-86 Sabres before his politically unwelcome views about the purchase of the F-104 Starfighter effectively finished his career.