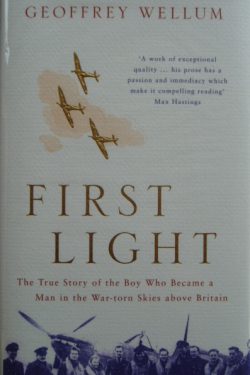 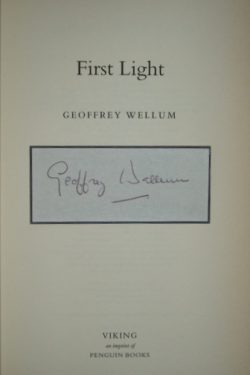 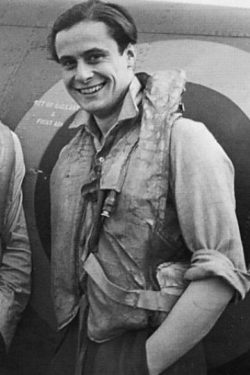 Signature of Geoffrey Wellum on the title page

An exceptional autobiography of life in the air in WWII. Geoffrey Wellum’s RAF commission came through in 1939 and he was posted to No 92 Squadron, aged just 17 and became one of the youngest participants in the Battle of Britain. In March 1942 he went to No 65 Squadron at Debden, and from there to Malta. Returning to England he became a Typhoon test pilot and stayed in the RAF after the war as a staff officer.

‘A work of exceptional quality….a passion and immediacy which makes it compelling reading’ ~ Max Hastings

‘An extraordinarily gripping and powerful story’ ~ The Evening Standard

The first print run of this book was very small, but the book quickly became a bestseller and there were at least 14 later impressions of the hardback before it went into paperback.

‘First Light‘ is a true modern classic, totally compelling reading and ranks alongside Hillary’s ‘The Last Enemy‘ as a testament to ‘The Few’.