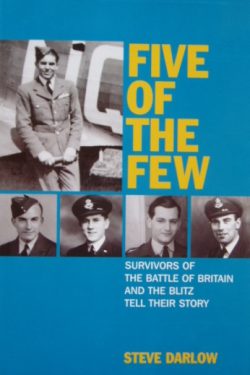 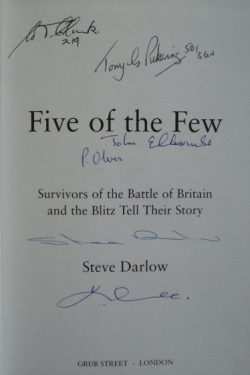 FIVE of THE FEW

Survivors of the Battle of Britain tell their story

Signed by all ‘Five of the Few’ on the title page

Fine condition hardback book and dustjacket.  As new and unread.

Their experiences were varied but their cause was common. The survival of Britain was at stake. They, with the other ‘Few’ had to stop the Luftwaffe’s attempt to prepare the way for a German invasion. The odds were against them, the stakes were high. The risks were immense.

Each man would survive those momentous days in 1940, but there were close calls and they would not all come out of the air battle unscathed. They have extraordinary stories to tell. Promotions, decorations and command responsibilities would come their way. But not all would make it through safely to the end of the war: two of them would end up behind barbed wire.

Collectively this book is a war story of youth maturing, through aspiration and idealism, courage and bravado, fear and heroism, memory and reflection. It is a reminder of why so much was owed, and still is, by so many to so few.