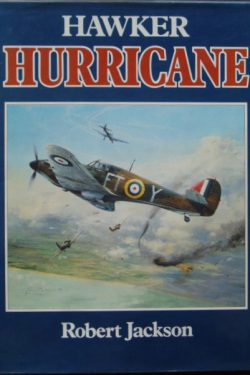 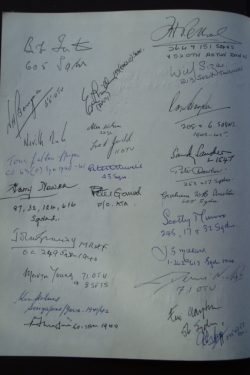 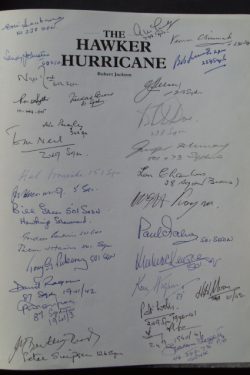 Signed by 85 WWII Hurricane Pilots ~
45 Battle of Britain and many distinguished others including:

Very Good condition hardback book and dustjacket.  Clean and bright. A smart copy.  A flyer for Robert Taylor’s outstanding tribute to the Hurricane titled ‘Undaunted by Odds’ has been neatly attached to the inside back cover.  The book comes with a complete list of the signatures.

A well researched and presented study of the heroic fighter which bore the brunt of the RAF’s defensive efforts in the early days of WWII and went on to distinguished service in just about every other theatre of the war.

The collection of signatures in this book are from pilots who flew the Hurricane in the Battles of France, Britain and Malta; in the Western Desert, over the jungles of Burma; in Russia, Singapore, in training, by ferry pilots of the ATA and by test pilots. The majority have noted their squadrons or connection to the Hurricane.

A great Hawker Hurricane book which contains a magnificent collection of Battle of Britain and other veteran Hurricane pilot signatures.