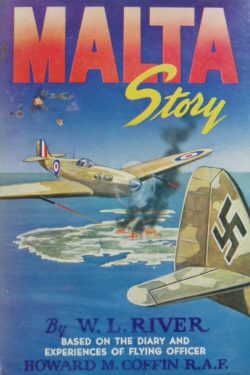 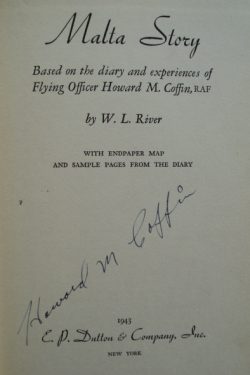 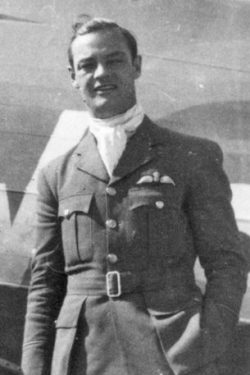 Based on the diary of Fg Off Howard M Coffin

Signed by Flying Officer Howard Coffin on the title page

EP Dutton & Co First Edition, first impression 1943.  222 pages with maps as endpapers and illustrated with sample pages from the diary.

Howard Coffin, an American from Los Angeles, enlisted to fight with the RAF in January 1941 and after training in Canada found himself flying a Hurricane off the deck of HMS Ark Royal bound for Malta.  He arrived there in August 1941, joining 126 Squadron and remained for a year before flying back to the UK and then back to the USA where he transferred from the RAF to the USAAF and passed on his experiences as an aerial gunnery instructor.

In this dramatized account, based on diaries and discussions with Coffin, the fascinating story of the defence of the island, first against the Italians and then increasingly against the Luftwaffe, is told through the eyes of an American volunteer and it makes for a dramatic story of combat, comradeship and courage in the face of daunting odds.

A very rare and collectable signed volume for anyone with an interest in the epic story of Malta.