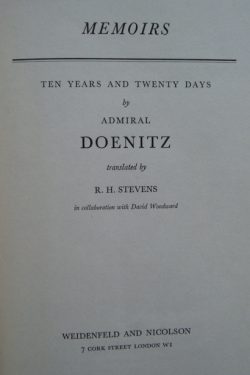 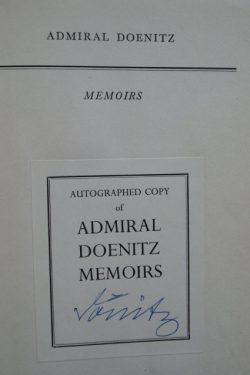 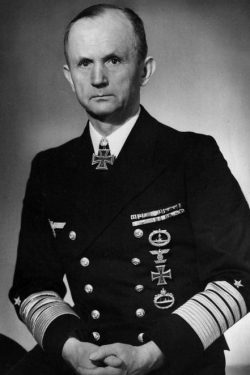 Publisher’s bookplate on the half title page signed by

Dönitz includes details of the U-boat campaigns during the Second World War as well as the opinions, ideas and commentary on the period. Of particular interest are the comments regarding British and American conduct during the war. An important social document, and an invaluable source for any student of the last war.

He became the last Führer of Germany after Hitler’s suicide in May 1945 and the book’s subtitle, ‘Ten Years and Twenty Days’, is a direct reference to the time Karl Dönitz spent in Spandau Prison having been convicted of war crimes following trial at Nuremberg. Doenitz wrote his memoirs upon his release. In a clear firm style he discusses the planning and execution of the U-boat campaign; the controversial sinking of the Laconia; America’s “neutrality” before its entry into the war; the Normandy invasion; the July 1944 bomb plot; his encounters with Raeder, Göring, Speer, Himmler, and Hitler; as well as his own brief tenure as the last Führer.

A scarce signed copy of this classic book.