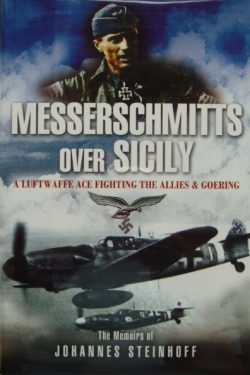 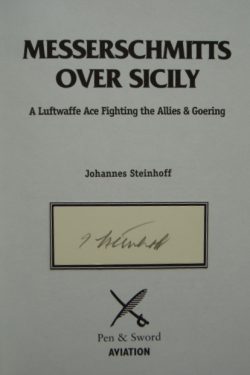 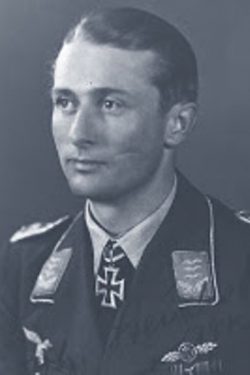 The Memoirs of Johannes Steinhoff

Very Fine condition hardback book in black and red boards with a similar condition unclipped dustjacket. It has dark red endpapers and a neat profile of Steinhoff’s Bf109 from the Sicily campaign is mounted on the front endpaper. A really smart copy in all respects.

Johannes ‘Macky’ Steinhoff was the commander of JG77 during the Sicilian campaign and this book provides a vivid account of the defence of Sicily before the Allied landings on the island.  Steinhoff, an ace with over 100 victories, recounts the psychological strain and physical perils that the pilots faced – a similar experience to those faced a few months earlier by the RAF fighter pilots on Malta.

He tells of the humiliation felt by his men when the inept, amateurish Goering called them cowards for failing to stem the tide, yet the pilots flew their Messerschmitts into hopeless situations as a matter of personal vindication.  The author conveys the intensity of a fighter pilot’s experience in war and reveals the thoughts of men trying to retrieve an impossible strategic situation with their skill and bravery.

This is a fascinating read and the superb Steinhoff signature makes it a great addition to a WWII aviation collection.