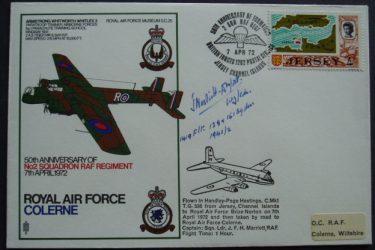 An RAF Museum cover from 1972 signed by

At the outbreak of WWII, Nesbitt-Dufort, who was a very experienced instructor, managed to find a way onto operational duties. First with a Night Intruder Squadron and then with Special Duties Squadrons, he specialised in flying agents in and out of Occupied France on cloak and dagger missions which are vividly described in his book. In January 1942 he evaded capture and returned to the UK after he crashed landed Lysander (T1508-MA) while inserting agents near Issoudon due to low fuel and icing. Later he returned to test flying and then commanded a Night Fighter Wing flying Mosquitos and Spitfires.

The FDC is in Fine condition