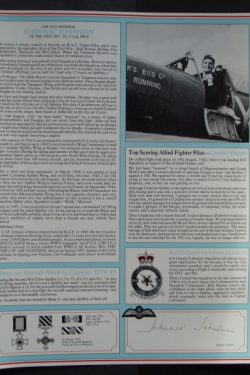 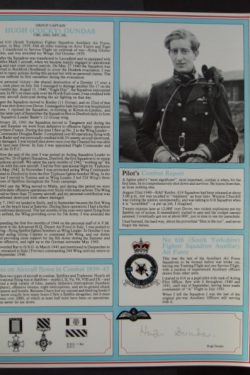 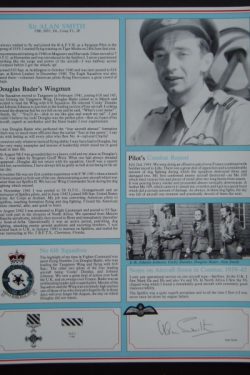 Published over 30 years ago by the Military Gallery, these are remarkable profiles of legendary RAF Aces of WWII. Each fighter ace personally wrote his own profile and then autographed each copy in pencil

Cards measure 21 x 27 cm and are in Fine condition

was the nickname of the Tangmere Wing of Spitfires led by Douglas Bader in the summer of 1941. The unusual name came from the witty message chalked up on one of the Wing’s notice boards – ‘Bader’s Bus Company – daily tickets to the Continent – Return tickets only!’ Every time the mercurial Wing Leader crossed the French coast he would announce: ‘Bader’s Bus Company on time’.

Bader pioneered the use of the ‘finger-four’ formation in the RAF and the following 3 aces regularly flew in Bader’s section of 4 aircraft.  Sir Alan Smith recalled: ‘The highlight of my time in Fighter Command was the time spent flying Number 2 to Douglas Bader who was leading the Tangmere Wing and flying with 616 Squadron. The other two pilots of the four leading aircraft being ‘Cocky’ Dundas and ‘Johnnie’ Johnson.  We saw a great deal of action over both the UK and on sweeps to France.  Bader was an exhilarating leader and a superb pilot.  Morale of the Squadron and the Wing was extremely high and we were privileged to fly in those days….’