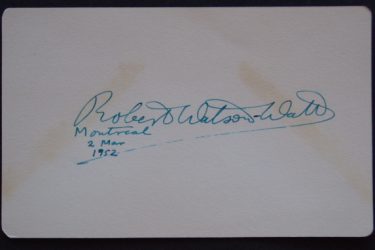 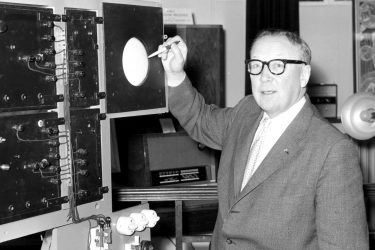 Sir Robert Watson-Watt (1892-1973) was a Scottish scientist who was the driving force behind Britain’s vital early warning RDF/radar network that detected incoming German bomber and enabled RAF fighters to intercept them.  As such, he was one of the four technical geniuses without whose inventions the Battle of Britain couldn’t have been won – the others being RJ Mitchell, Sydney Camm and Henry Royce.

Much has been written about the development of RDF/radar. Interestingly, the efforts of Watson-Watt and fellow British scientists to develop radar in the years leading up to WWII was the subject of a 2014 BBC drama ‘Castles in the Sky’ with Eddie Izzard starring as Watson-Watt.

A very scarce and collectable signature