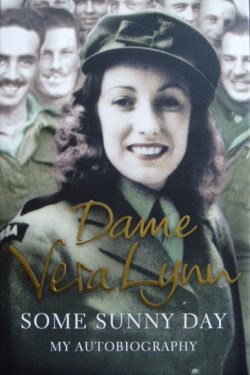 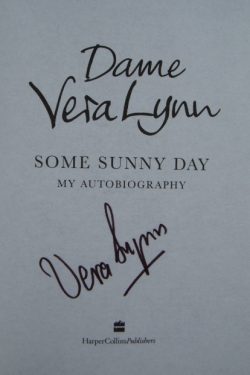 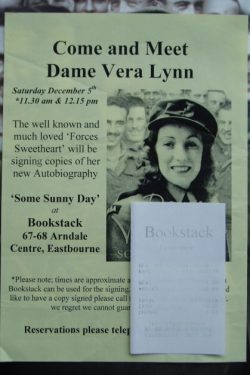 Signed by Dame Vera Lynn on the title page

Fine condition hardback book and dustjacket. Clean, tight and feels unread – it is practically new.  The book comes with an event flyer and associated original receipt.

The remarkable autobiography of the last great wartime icon, ‘Some Sunny Day’ gives a vivid portrait of Britain at war, and tells the unique story of one woman who came to symbolize the heart of a nation.

Born Vera Welch on 20 March, 1917 in the East End of London, Dame Vera Lynn’s career was set from an early age – along with her father, who also did a ‘turn’, she sang in Working Men’s Clubs from just seven years old. She had a successful radio career with Joe Loss and Charlie Kunz in the 1920s and ’30s, but it was with World War II that she became the iconic figure that captured the imagination of the national public. Her spirit and verve, along with her ability to connect with the men fighting for their country and those left behind praying for their loved ones, made her the ‘Forces’ sweetheart’.

Performing the songs that she will always be associated with, such as ‘We’ll Meet Again’ and ‘The White Cliffs of Dover’, Vera toured Egypt, India and Burma to entertain the troops and bring them a sense of ‘back home’. Her career after the war flourished, with hits in the US and the UK, but Vera was never able to leave behind her wartime role and was deeply affected by what she had seen. This is Dame Vera’s vivid story of her life and her war – from bombs and rations to dance halls and the searing heat of her appearances abroad.

A fabulous copy of this long awaited book, enhanced by the bold, undedicated signature of a ‘national treasure’.