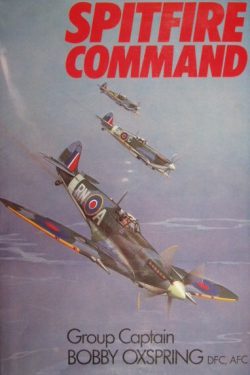 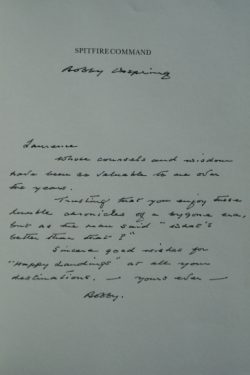 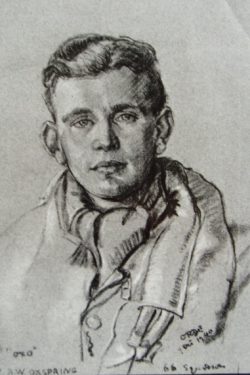 ‘……. Whose counsels and wisdom have been so valuable to me over the years.
Trusting that you enjoy these humble chronicles of a bygone era,
but as the man said “what’s better than that?”
Sincere good wishes for “Happy Landings” at all your destinations.
Yours ever
Bobby

Fine condition hardback book in dark blue boards with a Fine condition unclipped dustjacket.  Oxspring has made a couple of hand corrections to minor errors in the text. A great copy.

One of the original ‘Ten Fighter Boys’ of 66 Squadron, Bobby Oxpring flew Spitfires throughout his wartime career starting with Dunkirk and then the Battle of Britain.  Apart from two brief rests from operational flying, he was one of that select band of fighter pilots who flew throughout WWII, scoring over 13 victories and being awarded 3 DFC’s.  He died in 1989.