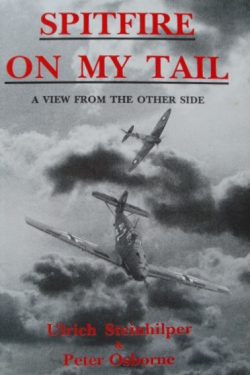 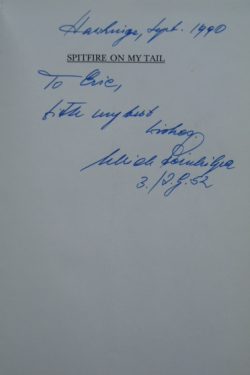 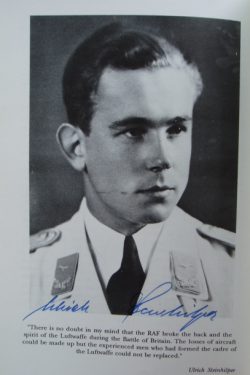 SPITFIRE on my TAIL

A View From the Other Side

Inscribed, signed and dated on the half title page and signed again on his portrait

Independent Books 1990. Second edition with 352 pages and 10 additional photographs from the Battle of Britain.

This book is one of the rarest viewpoints on the Battle of Britain – that of an ordinary German fighter pilot.

Steinhilper writes with charm, humour and feeling. This book has tremendous atmosphere. Despite the passing of time Steinhilper manages to make the experience of 1930s Germany your own. After joining the Luftwaffe in 1936 he describes his flying training and the build up to war. We follow him onwards towards the Battle of Britain, his combats and his uncompromising views of the conduct of the battle both by the Luftwaffe High Command and the RAF. He was shot down over Kent in October 1940 and the last chapter describes the excavation of his aircraft exactly 40 years later.