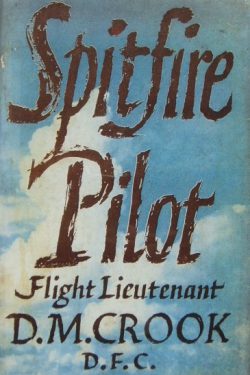 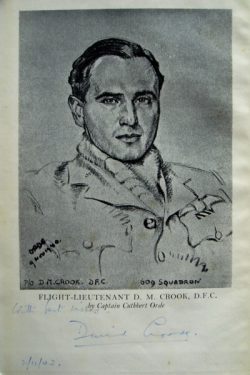 Signed on the frontispiece portrait by

A hardback book in Very Good condition despite the age of book and wartime paper standards. It has a Very Good condition, unclipped dust jacket which has some wear and minor loss to the corners and top of the spine but looks smart in a protective cover. A nice copy of this classic book.

David Crook, a pre-war Auxiliary, recounts his experiences flying with 609 (West Riding) Squadron in 1940 and ’41. During his first tour, with which this book deals, he was credited with 7 victories. Apparently, most of the book was written while waiting at ‘readiness’.  After being rested he returned to operations and brought his score to 12½. He was listed as Missing In Action on 18 December 1944 aged 30 whilst on a high level photographic sortie.

One of the most collectable signed Battle of Britain memoirs, and this is a well preserved copy.