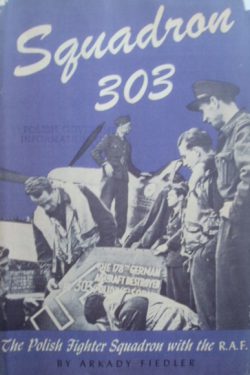 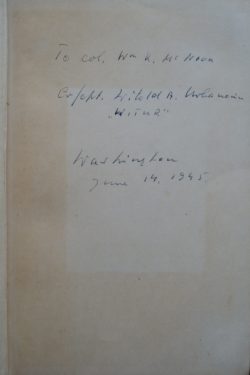 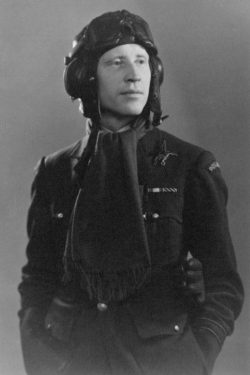 The Polish Fighter Squadron with the RAF

William McNown joined the USAAF in 1936. He was the first CO of the 324th Fighter Group (June 1942 to December 1943)
flying P40s in Tunisia. After a staff tour in Washington he was appointed Military Attaché to Egypt in 1946.

Very Good condition hardback book with silver gilt Polish pilot wings embossed on the front cover.  The Near Fine condition dustjacket is complete and unclipped with just a little loss at a couple of the corners. There is a small faint stamp on the front cover which says ‘Polish Government Information’. The book is clean and square with a solid binding. There is some marking to the front cover and McNown’s bookplate on the inside front cover. Altogether, this is a very presentable copy of the book.  The American edition of this book is far superior in quality to the British Peter Davies edition which was subject to wartime restrictions.

This is the tale of Polish defiance, of the dashing fury with which a few gallant exiled airmen charged into the midst of the enemy and turned 303 Squadron into the top scoring RAF unit of the Battle of Britain and created a legend.  Chapter 15 tells the story of ‘Witur’ aka Witold Urbanowicz.

Witold Urbanowicz (1908 ~ 1996) was the second highest scoring Polish fighter ace in World War II. During the Battle of Britain, Urbanowicz was credited with fifteen victories and commanded 303 Squadron then helped to set up the first Polish fighter wing at Northolt.  In 1942 he was sent to the USA to recruit Americans of Polish descent and give lectures and he also flew P40s in China and shot down two Japanese aircraft. Post war he settled in the USA.

A scarce Battle of Britain book in this edition, made exceptional by a neat period Urbanowicz signature.