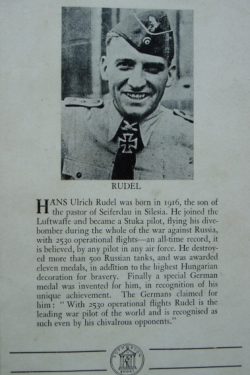 Air war on the Russian Front with Germany's most decorated pilot

Possibly the best pilot memoir about the air war on the Russian front, Rudel began his amazing career as a Stuka pilot in Poland in 1939, fought in the battles of Leningrad, Stalingrad and Kursk and finished the war flying an FW190 and minus a leg.

A scarce book in this early edition in this condition with a complete dustjacket. An amazing and eye-opening read.