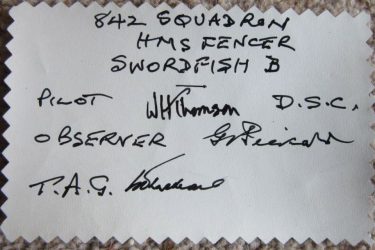 Signed by a Swordfish crew who protected the Atlantic Convoys

This edition was produced to help raise the awareness of the crucial role that the Swordfish played in helping to win the Battle of the Atlantic.

The swatch is signed by three members (Pilot, Observer and TAG) of one crew who flew together in 842 Squadron from the Escort Carrier H.M.S. Fencer.

Over the first two days of May 1944, this crew, whilst protecting Convoy RA59 from H.M.S. Fencer, were credited with the sinking of 3 U-boats, 2 with depth charges and 1 with rockets.

The pilot, ‘Tommy’ Thomson, provided some of his original photographs which are used on the certificate to show the unbelievable weather conditions which they had to face on a daily basis.