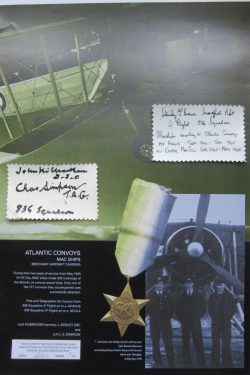 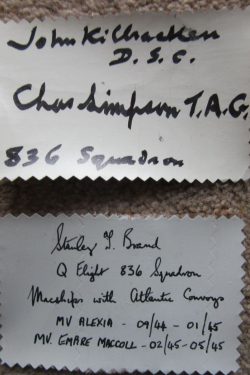 Few people are aware of the invaluable part played in the Battle of the Atlantic by MAC Ships.

These were Merchant Aircraft Carriers – converted Grain Ships or Oil Tankers which had had their superstructure replaced by a flight deck to accommodate (usually) 3 Swordfish and, sometimes, a flight of fighter aircraft. Thus, the convoy had constant air protection, even in the middle of the Atlantic, with minimum reduction in cargo transport, for the MAC Ships still carried the grain or oil etc. in their holds. As you might expect, conditions were tough…… many had no hangars.

When Lord Kilbracken was asked for his help, he immediately roped in his TAG, who lived in Canada. Thus, rather poignantly, each of the swatches for this edition has crossed the Atlantic in both directions!