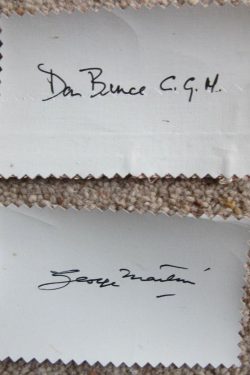 On the 24th May 1941, three days before his 20th birthday, Leading Airman Donald A. Bunce was a Telegraphist Air Gunner (TAG) in the back of a Swordfish attacking the mighty Bismarck with torpedoes. 8 months later, he won his Conspicuous Gallantry Medal for his role in the ill-fated “Channel Dash” incident – the gallant attempt to destroy the German ships Scharnhorst, Gneisenau and Prince Eugen. All six aeroplanes were destroyed and Don was the only surviving TAG.

Once he had recovered from his injuries, he was sent to Trinidad to train Observers in Air Gunnery and Navigation. Amongst his pupils, on the 73rd Observer Course was 18 year old Midshipman (A) George Martin.

Many years later, having qualified as an Observer to fly in Swordfish, George Martin was to become known worldwide for something very different…… as the highly talented music producer who was known as ‘The Fifth Beatle’.

When contacted, Sir George Martin said how honoured and humbled he was about sharing this edition of this series with Don….a man for whom he had the utmost admiration and respect. Understandably, Don could not recall the 18 year old Midshipman!

Don Bunce’s account of the Channel Dash can be found in the book ‘TAG on a Stringbag’  by Les Sayer and Vernon Ball.