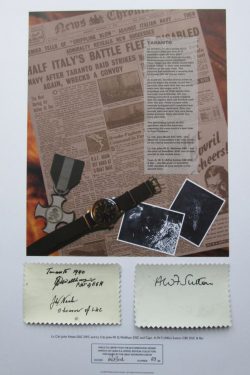 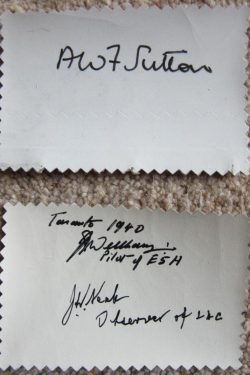 Lt Cdr. John W.G.Welham DSC
Pilot of  Swordfish E5H, one of 9 aircraft in the second wave

Lt. Cdr. John Neale DSC DFC
Observer in Swordfish L4C, one of the 12 aircraft in the first wave

Capt. A.W.F. ‘Alfie’ Sutton CBE DFC*
Observer in Swordfish L5K, another of the 9 aircraft in the second wave

At 20.35 hrs. on the evening of 11 November 1940, the first of 21 Swordfish took off from H.M.S. Illustrious to fly 200 miles across the Mediterranean in the moonlight. Their target was the Italian battle fleet tucked ‘safely’ in their well defended harbour at Taranto, Italy. The planners had estimated a casualty rate of at least 50% for the 42 air crew. The TAGs had been left behind to make way for a 100 gallon oil drum full of the extra petrol needed for the long flight which ‘sat’ in the open cockpit next to the observer.

At 22.56 hrs. the first of the two waves of aircraft began to attack. In the 10 minutes over the target they had sunk two battleships and left a third so badly crippled that the repairs were not finished until after the war. Three cruisers were severely damaged and a seaplane base and an oil refinery destroyed. Only two aircraft were lost; two crew were taken prisoner, but sadly, the other two were killed. The astounding success of this operation led to the Japanese repeating the same tactics a year later at Pearl Harbour.