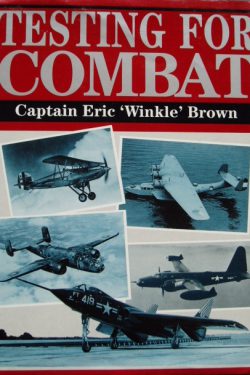 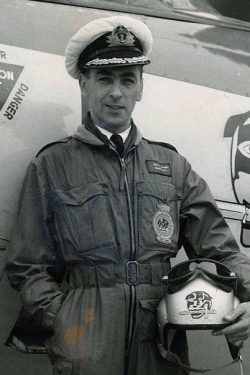 Bookplate signed by Eric Brown on the title page

Eric Brown, one of Britain’s greatest test pilots, takes the reader into the cockpits of 40 varied and interesting aircraft from the period 1938-50.  Using contemporary notes taken whilst testing the aircraft and placing the aircraft in their historical context, ‘Winkle’ analyses their flight characteristics and reveals some of their idiosyncrasies and delights.  Aircraft covered include such gems as: Arado Ar240, Whitley, Lancastrian, Liberator, Skyraider, Focke-Wulf Ta154, F9F Panther, Halifax, Thunderbolt, Typhoon and Tempest.

He was decorated more times than any other British test pilot and Fleet Air Arm pilot. He had a world record of 2,407 deck landings to his credit, including many world ‘firsts’. He also recorded more catapult launches than any other pilot. Extensive research indicated that he had flown more types of aircraft than any other pilot in the world, and certainly the most astonishing assortment. He was Chief Naval Test Pilot at RAE Farnborough, and became the first naval officer to command the world renowned Aerodynamics Flight, which was regarded as the top post in British experimental research test flying.

A fascinating read for armchair warriors, enhanced by a neat Eric Brown signature.

This book is listed on ACE.  To purchase, contact Spitfire Books