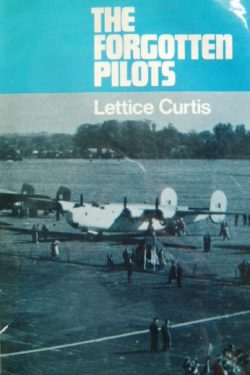 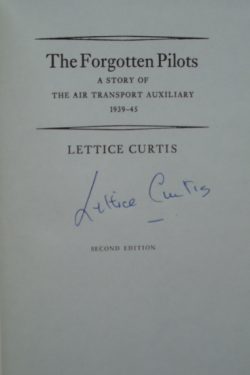 Signed by Lettice Curtis on the title page

Fine condition hardback book in dark blue boards with silver titles. The unclipped dustjacket is also in Fine condition. A superb example of the book in all respects.

Lettice Curtis, one of the very distinguished female ATA pilots, tells the story of the Air Transport Auxiliary and particularly the story of how women pilots came to be employed by the ATA and how they progressed from flying Tiger Moths to four-engine bombers. The story takes in the work of the ATA as a whole, including its ground support organisation. It describes the training, day-to-day work and the aircraft flown by ‘The Forgotten Pilots’ intermingled with personal reminiscences of an incredibly varied and hazardous five years.

In early July 1940 Lettice Curtis became one of the first women pilots to join the Air Transport Auxiliary remaining with the ATA until 30 November 1945, when the organisation was closed down. She commenced her ATA career by delivering primary training aircraft such as the Tiger Moth, progressing to the Miles Master and North American Harvard advanced trainers. During her ATA service she graduated to fly all categories of wartime aircraft and was one of the first dozen women to qualify to fly four-engined heavy bombers. She was the first woman pilot to deliver an Avro Lancaster bomber and also flew 222 Handley Page Halifaxes and 109 Short Stirlings. She flew continually during World War II from various Ferry Pool locations delivering all types through all weather to various destinations flying for sixty-two consecutive months between July 1940 and September 1945.

There have been a plethora of recent books about the ‘Spitfire Girls’ of the ATA, but this is still the most comprehensive work about the ATA combined with a personal memoir of one of its most qualified female pilots.