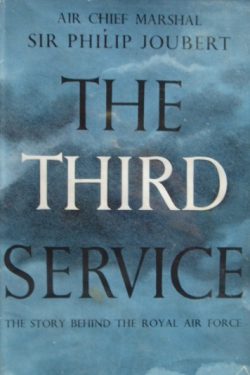 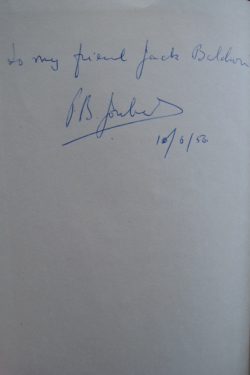 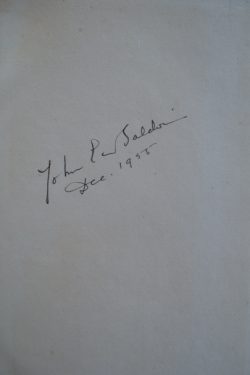 The Story Behind the Royal Air Force

Near Fine condition hardback book. Clean, tight and bright.  A Very Good condition, unclipped dustjacket with a bit of wear at the edges and corners but generally smart.

This is a readable and accurate history of the Royal Air Force, concentrating on many of the personalities who were responsible for its formation and operation in the early days and who were personally known to the author. It has a good review of the part played by Marshal of the RAF Lord Trenchard, who moulded the RFC and virtually created the RAF single-handed.

Air Chief Marshal Sir Philip Bennet Joubert de la Ferté, KCB CMG DSO (1887 – 1965) joined the British Army attending the Royal Military Academy Woolwich and gaining his commission in 1907. He served in the Royal Field Artillery, rising to the rank of Lieutenant. In 1913 he attended the Central Flying School and went on to serve in the Royal Flying Corps. With the outbreak of the First World War in 1914, he joined the British Expeditionary Force flying one of the first two operational sorties of the war. In 1915 Joubert was appointed Officer Commanding, No. 15 Squadron RFC. Later that year he took up command of No. 1 Squadron. As the war progressed, Joubert  commanded No. 33 Squadron and then several different wings. On 1 April 1918 Joubert transferred to the Royal Air Force in the rank of Lieutenant Colonel and by the end of hostilities in 1918 he had command of the Royal Air Force in Italy.

He had several commands between the wars and was a senior commander in the Royal Air Force during the Second World War including being Air Officer Commanding Coastal Command.

Educated at Rugby School and Sandhurst, Baldwin served as a cavalry Officer until he gained Royal Aero Club’s Aviator’s Certificate no. 971 on 17 November 1914 and transferred to the Royal Flying Corps. He was appointed Officer Commanding No. 55 Squadron in October 1916 and Officer Commanding No. 41 Wing in December 1917 before transferring to the Royal Air Force on its formation in 1918. He served as Commandant of the Central Flying School in 1928, AOC No. 1 Group in 1934, Director of Personal Services in 1935 and Commandant of the RAF College Cranwell in 1936 before taking up the post of AOC No. 21 Group in 1938. He retired in August 1939.

Just two weeks later, Baldwin was recalled to serve in World War  II as AOC No. 3 Group at RAF Bomber Command. Between 9 January and 21 February 1942, he was acting Commander in Chief of Bomber Command, after the removal of Richard Peirse and before the appointment of Sir Arthur Harris. In October 1942 he became Deputy Air Officer Commanding-in-Chief, India followed by a posting as AOC Third Tactical Air Force which supported the ground battle in South East Asia. He reverted to the Retired List again on 15 December 1944.

A useful non academic history of the RAF together with two good WWI and Senior Commander signatures.