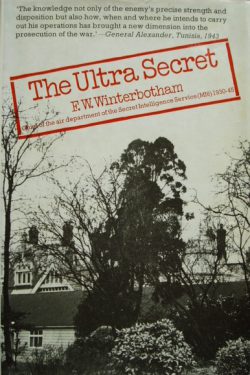 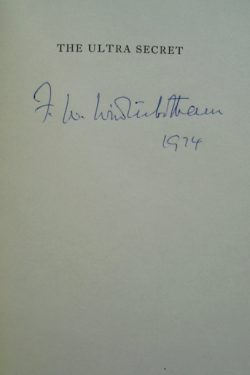 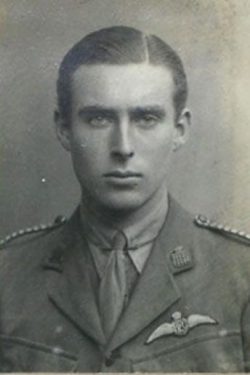 The inside story of Ultra, Bletchley Park & Enigma

Signed & dated on the half title page by

Very Good condition hardback book and dustjacket with some light foxing to the edges of the text block.

In 1917, Winterbotham was a fighter pilot on 29 Squadron in the RFC but was shot down, and as a prisoner of war he learned to speak German. Upon leaving the military he got a degree in law from Oxford and in 1929 he joined the MI6 as Chief of its Air Intelligence Department. In this capacity he often visited Germany in the 1930s, using a Foreign Office job as cover. By 1939 he had also helped develop a new method of aerial photo-reconnaissance that was very useful to the British in World War II.

But it was his role in the Enigma/Ultra project that was so important to the Allied war effort and he revealed the story of the Ultra project for the first time to the general public in this book, ‘The Ultra Secret’ in 1974. Until the spring of 1974 there had been an official ban on any reference to Ultra material and this had had an inhibiting effect on the writing of WWII military history.

The impact of this book was extraordinary and showed the importance of how intelligence was received, decrypted and processed to Britain’s survival in 1940 and 1941 and in the later victories.  It was Ultra intelligence that provided the key to Dowding’s strategy in the Battle of Britain and later in defeating Rommel in North Africa and then in knowing the enemy’s movements, strength and likely behaviour in Italy, the Pacific and Normandy.

An exceptionally important WWII history book and a signed copy is a rare find.