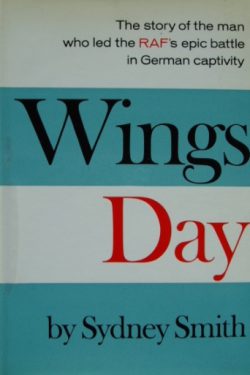 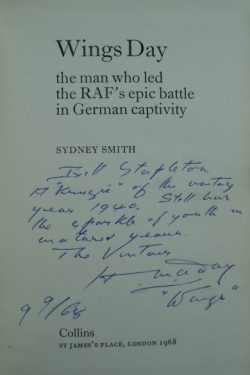 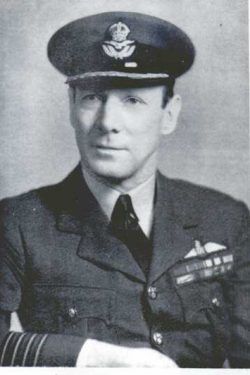 Bill Stapleton
A ‘Kriegie’ of the vintage year 1940.
Still has the sparkle of youth in matured years.
The vintage
HMA Day
“Wings”
9/9/68

Bill Stapleton (1920-2007) was a Pilot Officer flying Spitfires with 41 Squadron when he was shot down over Dunkirk on 1st June 1940. He spent 5 years as a POW, mostly in Stalag Luft III.  He was one of the vaulting horse carriers in the Wooden Horse Escape and he stayed in the RAF post war, retiring as a Wing Commander in 1964.

Fine condition hardback book in a Fine condition, unclipped dustjacket. Clean, tight and bright.  A very smart copy and comes with an Obituary of Wings Day from the Daily Telegraph.

At the age of 17 Harry Day joined the Royal Marines Light Infantry (1916) as a Probationary 2nd Lieutenant and served on HMS Britannia which was torpedoed off the coast of Gibraltar in November 1918, the incident which resulted in the award of his Albert Medal for bravery. Transferring to the Fleet Air Arm and then to the RAF, by the 1930s, Harry Day was a fighter pilot who was renowned for his formation aerobatic displays at the Hendon air shows.  He was also Douglas Bader’s flight commander.  In October 1939, by now a Wing Commander, he was shot down over Germany in a Blenheim and was taken prisoner.

For his services while a prisoner he was awarded the DSO and was made an Officer of the Order of the British Empire. He had been awarded an Albert Medal in the last days of WW1 and in 1971, after the change in the Royal Warrant, Harry chose to exchange his Albert Medal for a George Cross. Harry Day died in Malta on 2nd Dec 1977, aged 79.

One of the classic POW Escaper books and this is a very collectable signed true first edition with an excellent association.