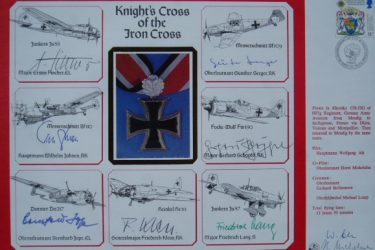 Knight's Cross of the Iron Cross

Major Erwin Fischer
Flew Do17, He111, Ju88, Me110, Poland, Battles of France & Britain, Malta & North Africa
The only reconnaissance pilot to receive this award

Hauptmann Wilhelm Johnen
Night fighter ace with over 34 victories. Author of ‘Duel Under the Stars’

Oberleutenant Gunther Seeger
Me 109 pilot in the Battle of Britain, ending the war with 56 victories

Major Gerhard Schopfel
Commanded III/JG26 in the Battle of Britain. He flew 700+ missions and had 40 victories

This Knights Cross cover was the last in the series and added in 1987 to mark the cordial post-war relationship between the RAF and Luftwaffe within NATO and the many personal friendships now established between former combatants.

Each cover which measures a large 32cm x 23cm carries the signatures of seven airmen, whose gallantry or leadership in the service of their country, has been recognised by the award shown. There is an illustration of the KC printed on silk and fixed to the cover.

It was flown in a German Army Sikorsky CH-53G and signed by the crew.

Certified and signed to the reverse by Hans Rossbach, this is number 301/692 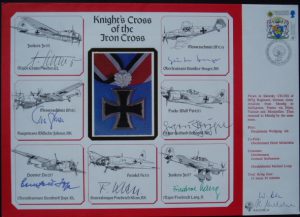