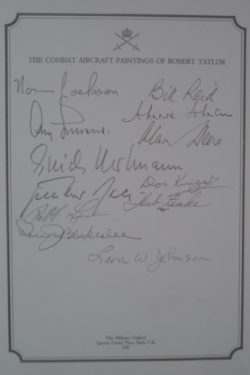 Bookplate with the signatures of 12 legendary WWII aviators

The bookplate, originally signed in 1987 for Robert Taylor’s first book of air combat paintings, is perfect to mount in any of Robert’s series of books which feature the aircraft of many of these 12 legendary WWII RAF, Luftwaffe and USAAF aircrew

Signed in pencil by

A fantastic collection of signatures which was pretty special when it was originally produced and now over 30 years later is both rare and highly collectable!

Add it to one of your books!